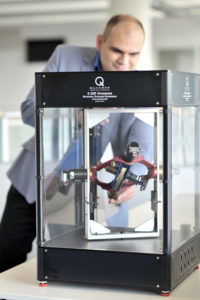 I received the B.Sc. degree in Electrical Engineering and the M.Sc. degree in Information Technology in parallel with distinction at the University of Pannonia, Veszprém, Hungary, in 2004, and the Ph.D. degree (cum laude) from the Delft Center for Systems and Control (DCSC), Delft University of Technology (TUDelft), Delft, The Netherlands, in 2008. I was a Post-Doctoral Research Fellow at DCSC, TUDelft, in 2009 and at the Berkeley Center for Control and Identification, University of California Berkeley, in 2010. I held a position at DCSC, TUDelft, in 2011–2012. Currently, I am an Associate Professor at the Control Systems Group, Eindhoven University of Technology (TU/e) and I am a senior researcher at the Systems and Control Laboratory in the Institute for Computer Science and Control in Budapest, Hungary. I am the Associate Editor of the IEEE Transactions on Control Systems Technology and I was the general chair of the 3rd IFAC Workshop on Linear Parameter-Varying Systems in 2019

My research interests are in identification and control of linear parameter-varying (LPV) and nonlinear systems, developing machine learning methods with performance and stability guarantees for modelling and control, model predictive control and behavioural system theory. On the application side, my research focuses on advancing reliability and performance of precision mechatronics and autonomous robots/vehicles with LPV and learning-based motion control.

I received the TUDelft Young Researcher Fellowship Award in 2010, the VENI award of The Netherlands Organisation for Scientific Research in 2011 and the Starting Grant of the European Research Council in 2016. With my  research team, I have participated in several international (FP7, IT2-ESCEL, etc.) and national collaborative research grants.